So with the rollout of 5G and a pressing desire to blanket the world in better communication and digital networks, let's begin by looking at the current Connectivity ETF landscape.

4 Global 5G/Connectivity ETFs: A Look At The Landscape

(Note: KFVG is excluded because it is specific to China exposure only)

There are four global connectivity ETFs that total a little more than $2.5 billion in total assets under management.  These ETFs range from the First Trust Indxx NextG ETF (NXTG) which launched back in 2011 to the newest launching in March of last year, the Esoterica NextG Economy ETF (WUGI). The Defiance Next Gen Connectivity ETF (FIVG) has the most assets with $1.121 billion while the Global X Internet of Things ETF (SNSR) launched in 2016.

From a flows perspective, the segment has raked in over $1.3 billion over the last twelve months which accounts for more than 50% of total assets. FIVG has gotten the lions share over the past year but other products such as NXTG and SNSR have also seen an uptick in net inflows. Performance wise, the landscape has been tight year to date (1.44% - 5.68%) but over the past year has ranged from 84.60% (FIVG) on the low end to 112.06% (SNSR) on the high end. This data is very positive but what does it look like when we look at a more concentrated portfolio of these underlying companies? (more on this later!) 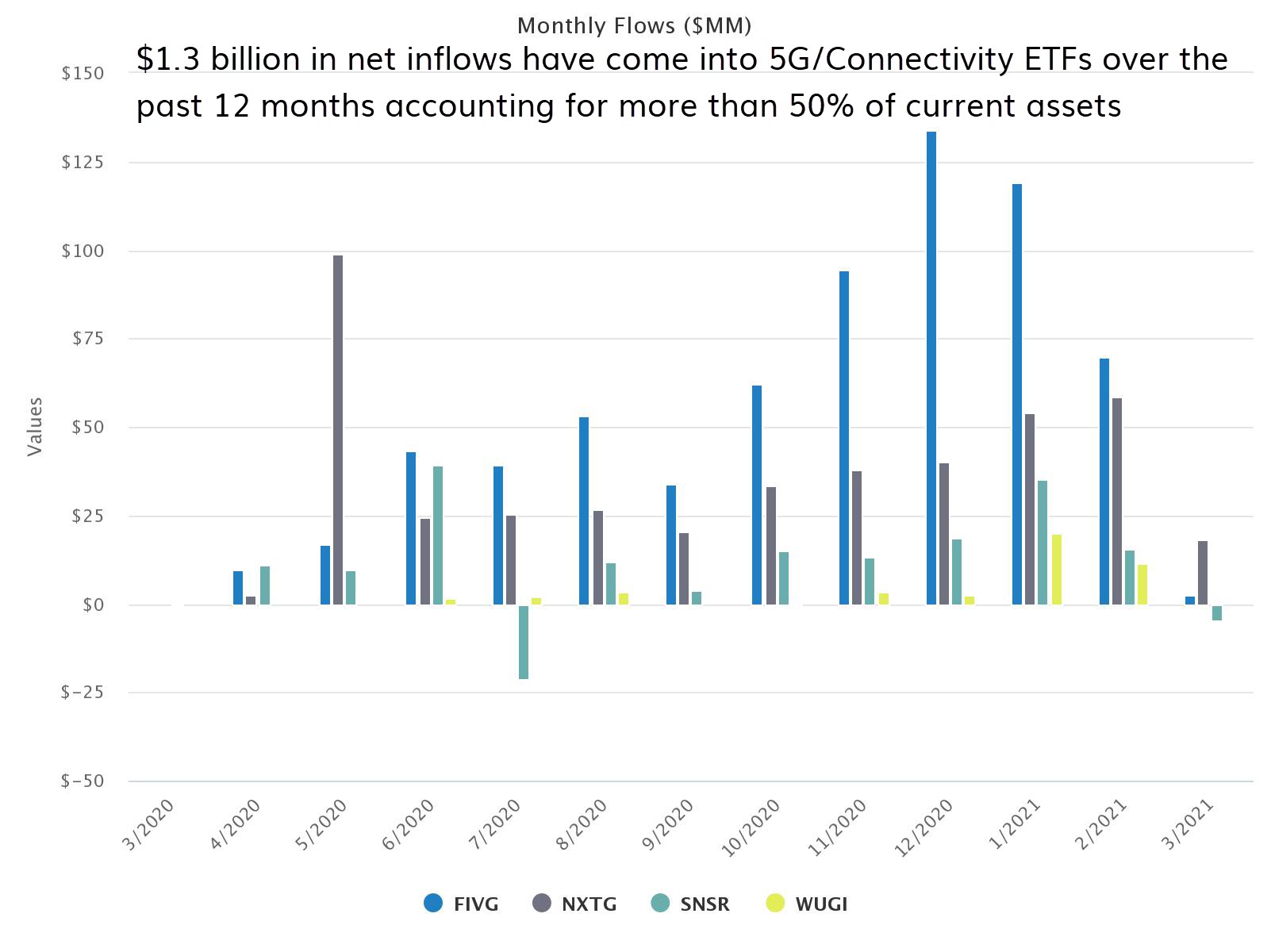 All four Connectivity ETFs (FIVG, NXTG, SNSR, WUGI) all fall under the Disruptive Tech segment in the ETF Action Classification System. From a composition standpoint, all ETFs have a global exposure that is near 50% U.S., 30% developed ex-U.S., and 20% Emerging markets (with some small variance throughout the group). Exposures skew towards large-caps and not surprisingly have the majority of their makeup in Information Technology at the sector level (at least 60% across the board).  Getting a bit more granular, all favor semiconductors and semiconductor equipment at the industry level.

Fundamentally speaking, the connectivity space is actually reasonable on a valuation basis relative to some other areas of the thematic space (ie: clean energy, evolving consumer groups) when looking at premiums vs historical levels. While not consistent across the entire landscape, there are some promising estimated 2021 and 2022 sales per share growth estimates that also appear attractive (oftentimes we put a greater weight towards sales per share metrics over earnings per share when analyzing thematic investments due to the early stage, high reinvestment, lack of positive earnings for many of these companies). 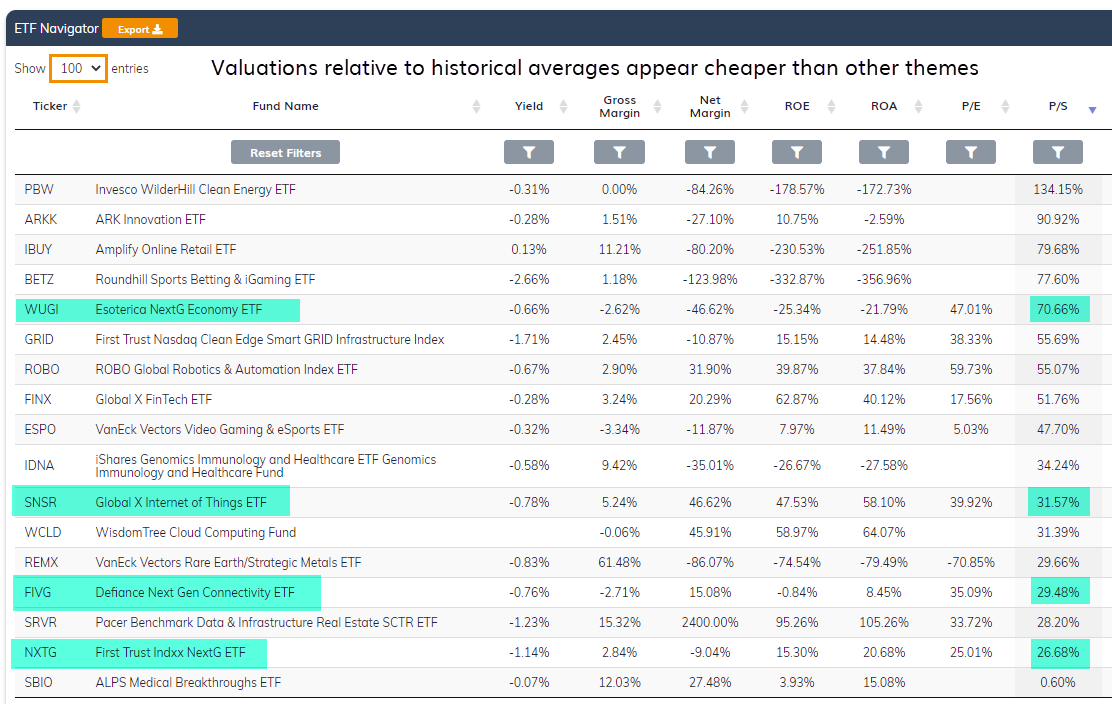 From the holdings of the four Connectivity ETFs, we can construct the ETF All-Stars® Connectivity Select Top 10 List, a ranking of stocks based on their prevalence among the funds.

The ETF All-Stars® Connectivity Select Top 10 List is depicted below: 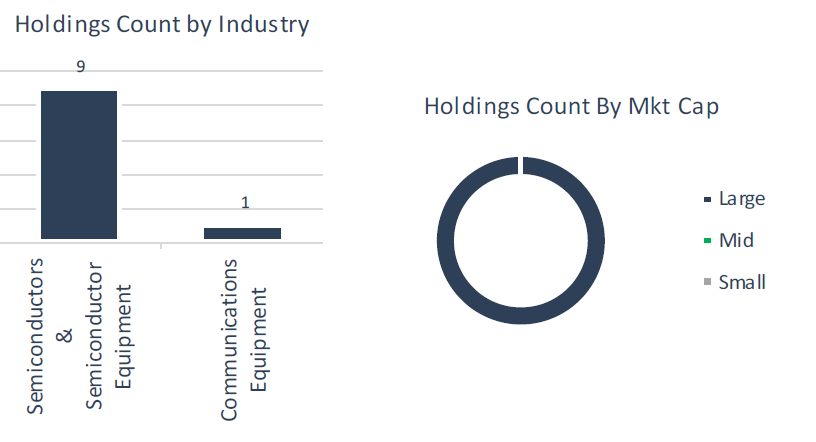 Connectivity & All-Stars: What's My Take Away?

We believe that 5G/Connectivity is in the early stages of a long-term secular trend. The momentum coming out of Washington for a massive infrastructure bill puts a focus on digital infrastructure buildout which lays out a robust macro backdrop for the companies that will take crucial roles in that process. Currently valuations are not completely out of control relative to the rest of the thematic space and the companies within the Connectivity All-Stars® Select Top 10 provide a great place to look for possible additions to a growth oriented portfolio.

Alex Shepard is the Director of Research for ETF Action. Contact him at alex@etfaction.com.